After a leisurely breakfast, with delicious bread that did not bother me, Trish dropped me off near her house with a hand drawn map, so I could stretch my legs by hiking up Mount Kaukau. The way up, along a steep trail, reminded me of California with rolling golden hills, windmills in the distance, and cypress-like Macrocarpo trees. Along the way I got a good overview of Wellington Harbor. The way down the other side was totally different. I felt like I was back in the jungle with lush greenery, noisy cicadas, and the calls of unseen birds. I thoroughly enjoyed it. At the end I met Trish for a delicious lunch at a café in the park.

In the afternoon, we visited a dozen or so artists’ studios as part of an annual Artists in Action event (perfectly timed for my visit). There was quite a variety, from mosaic mirrors to whimsical sculptures. Trish then drove me to a couple nice viewpoints, Mount Victoria and a Wind Turbine in Brooklyn, one of the highest points around. Overall it was a glorious day.

Shortly after we finished out dinner, the doorbell rang. A friend of Trish’s granddaughter (Trish has more than a dozen grandkids) had crashed on his skateboard only a block away. We spent the evening patching him up and then going to the pharmacy to restock my first aid kit. He will definitely be sore in the morning.

From the kiwi perspective, today is the first day of autumn. (I think they’re a few weeks early, but I’m not going to quibble with the natives). I went to church with Trish in the morning, at an inclusive Presbyterian congregation, then left her to go do touristy things. I rode a cable car up from downtown, walked down through the botanical garden, then along the wharf. It was a beautiful sunny day, much warmer than I expected New Zealand to be. I ended up at the Te Papa museum, the national museum of NZ. There is quite a variety of things to see, from dioramas of native wildlife to a beautifully carved marae, a Maori meeting house. They also have a preserved giant squid almost twice as long as I am tall. Trish rejoined me as I was enjoying a tea in the patio. Afterwards she took me on a very pleasant walk in the Otari-Wilton’s Bush, a reserve containing the largest remaining remnant of original forest in Wellington.

I met Trish almost a decade ago on a goddess pilgrimage to Crete. She visited San Francisco several years ago and I’ve finally made it down to her part of the world. She has a very cute double-A frame house decorated in charming colors. We had a lovely chat over dinner discussing our spiritual paths, social justice, and the critical need for women’s voices.

Today we went sightseeing to the north along the coast of the Tasman Sea, which separates New Zealand from Australia. We took walks along two beaches (Paraparaumu and Waikanae). Maori words and woodcarvings both remind me of Hawaii, perhaps reflecting a common ancestry. We saw a variety of shorebirds and Kapiti island; a permit is required to visit this bird sanctuary. In the distance we could occasionally see the hazy outline of the South Island, where I’m headed tomorrow. In between beaches, we had a pleasant outdoor lunch of “stuff on toast”, my favorite being salmon with dill and aioli. After our beach strolls, Trish took me for a drive to another amazing view of the area. We stopped at a bird blind, but the local drought had dried up the pond we were overlooking.

Our next stop was to a reflexologist who massaged the foot that’s periodically been bothering me. I hope it’s enough to allow me to continue with all the hiking I have planned. We had dinner at a restaurant called The Roundabout, located not surprisingly on one of the numerous traffic circles around here. (It’s been good to spend a few days as a passenger getting used to traveling on the “wrong” side of the road). After my Tarakihi fish dinner, we split a yummy meringue-based dessert, Pavlova, named after the Russian ballerina. The New Zealanders claim to have invented it; I’ve been warned not to believe the Aussies when they claim otherwise. 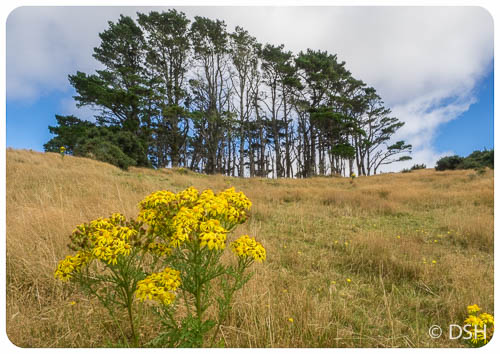 Near top of Mount Kaukau 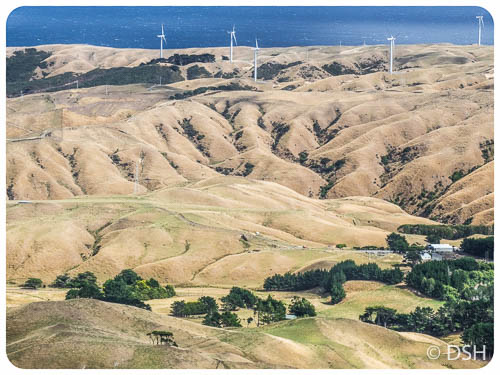 View from trig on Mount Kaukau

I can imagine a Hobbit emerging from here. 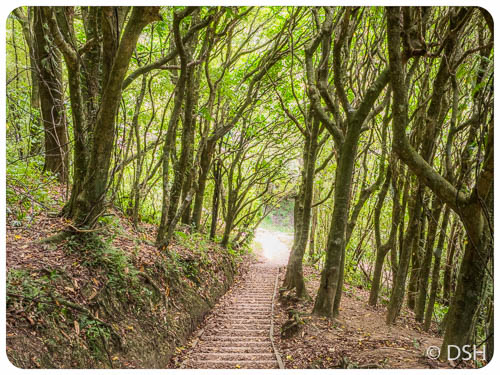 This pier needs a little maintenance 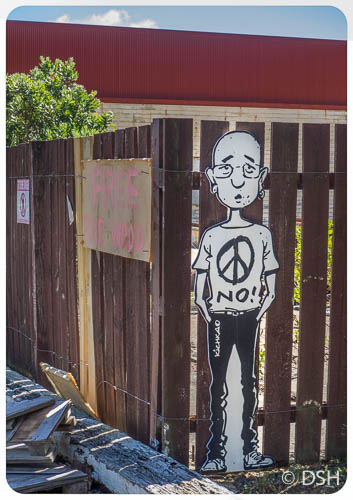 Sad to see no peace

One of many metal sculptures near mini-golf course

View from top of cable car 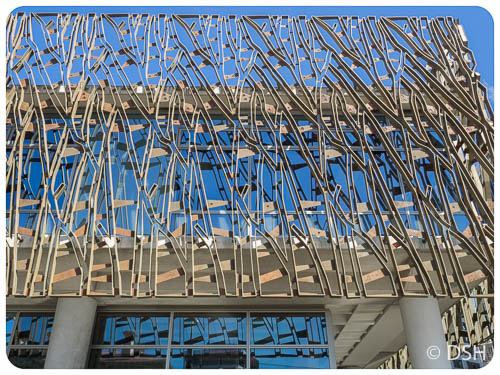 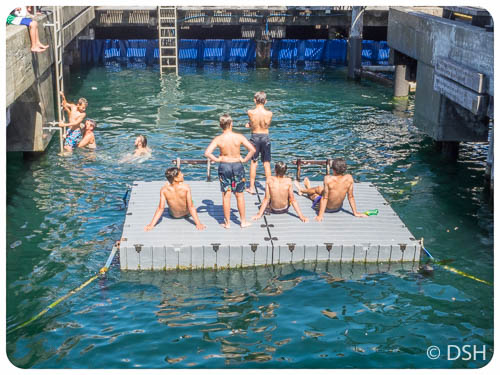 Swimmers near wharf. It may officially be fall down here, but to me it feels like summer. 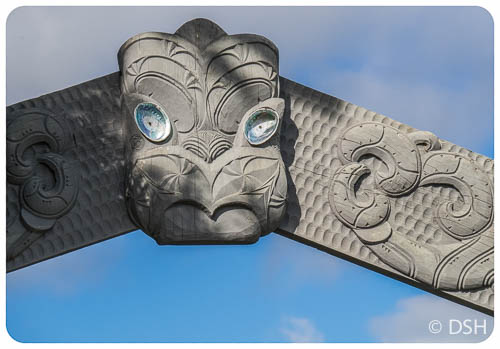 Near entrance to Otari-Wilton’s Bush Reserve 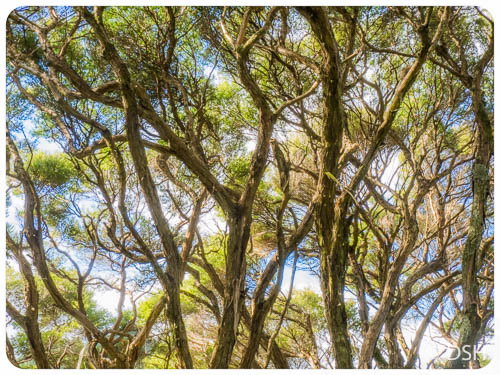 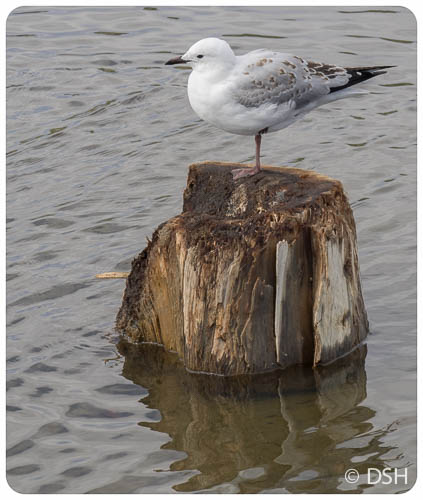 A perfect day for a beach stroll 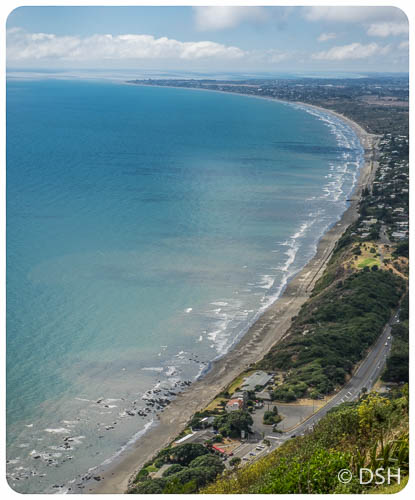