I’m in Florida for the first time since visiting my grandmother in 1988. She retired to West Palm Beach and when I visited her that summer, I vowed never to return. The humidity isn’t as oppressive this time, “only” 75%. Perhaps the unusually high humidity we experienced in San Francisco this year helped prepare me for it. This is my first venture into the southern part of this lush green state. I’ve enjoyed living in shorts and flip-flops.

The shuttle picked me up at 4:00 a.m., expediting my adjustment to the East Coast time zone. Our take off was delayed a bit, due to a mechanical problem with a cargo door, so I entered commute traffic when I left Miami in a rented Hyundai. It was dark by the time I got out of town, so I saw nothing but taillights as I drove the Tamiami Highway to Everglades City, near the northwest section of the national park. The animal crossing signs were flashing, but no one slowed down for the wildlife. Fortunately I saw no dead panthers or alligators, though cars kill many of them.

Considering the time change, it was mighty early when I got up to go on a four-hour guided canoe trip into the swamp. The mosquitoes were swarming when we got to the launch site, but they didn’t bother me on the water. The trip was great fun, in spite of a couple chatty couples sometimes spoiling the quiet; the little alligators quickly sunk beneath the surface as we approached. It was almost as magical as the Amazon jungle and not nearly as toxic. My favorite part was going through mangrove tunnels, especially when I was the lead canoe and had smooth reflective water in front of me. If I return, I’d consider doing the ten-mile trip from the launch site back to Everglades City, provided someone had recently gone through the tunnels and cleared the spider webs.

After lunch at Camilla Street Grill, a pleasant spot on the water right in back of the Ivey House where I’m staying, I headed south to the Gulf Coast Visitor Center and took another boat ride (the best way to see this place is definitely on the water). I saw a few of the Ten Thousand Islands. We spotted several dolphins. Afterwards, I toured the Smallwood Store in Chokoloskee, now a “museum” containing an eclectic collection of old stuff, ranging from Indian tools and giant snakeskins to old jars and equipment. I enjoyed chatting with the proprietor. By then it was almost time for sunset, so I watched the clouds turn yellow, a very pleasant end to a great day.

I considered canceling my pole boat tour, because I would be returning to the Turner River, but I’m glad I didn’t. This ride was more peaceful and better for photography than canoeing, especially since I was the only passenger. We were the first on the water and were able to see more wildlife. After the two-hour tour, I returned to the Skunk Ape Research Center, worth a stop, and got a personal tour of Rick’s collection of critters.

I then spent a couple hours driving around Big Cypress and stopping numerous times to photography birds and trees in the swamp.

I drove west to Cape Coral hoping to see lots of birds at the Ding Darling National Wildlife Refuge on Sanibel Island. I did see quite a few, but most of them were too far away to photograph, and I’m not sure it was worth the detour.

On my way to Miami, I stopped for a stroll in a sauna. At least that’s what my 3-mile walk in Shark Valley felt like. My shirt was soaked by the time I got back to the car. For my efforts, I was rewarded with several birds, a couple alligators in the water, a variety of flowers, and beautiful clouds. My favorite sighting was an Anhinga swimming underwater.

It was too early to check into our Airbnb when I got to Miami Beach, so I sauntered along the boardwalk, admiring the turquoise water and colorful umbrellas. That didn’t last long; soon I retired into an air conditioned restaurant for lunch. I take back everything I said about the weather not being oppressive. It got up to 90o F (that’s 32 o for you Celsius-minded folks) down here in the land of endless summer – too warm for me, especially when it’s humid.

Anne arrived early in the evening and we walked next door for a mediocre dinner – lousy wine and salty food.

We almost got back from a morning walk along the beach before the rain started. Since the sky was grey, we changed into dry clothes and braved the Aventura Mall, shopping for shirts and ponchos. The rain long stopped enough for us to take a short walk in the Wynwood area, filled with murals, galleries, and cafes. It started pouring just as we finished lunch at Coyo Taco, so we ordered hot beverages from Panther Coffee and waited for it to slow down. We headed out during a lull, but it started again and we were soaked again by the time we reached the car.

Early in my life I could easily recall every flight I’d taken, now I’ve lost count.

This is the first time I saw a rainbow from a plane. 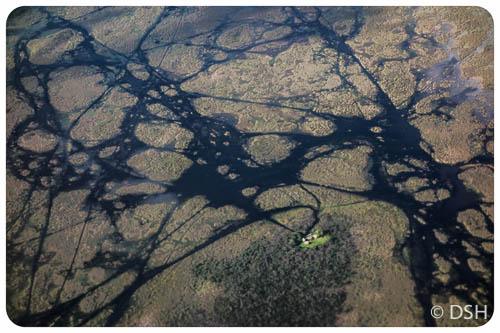 The Everglades from a plane

The Everglades from a boat 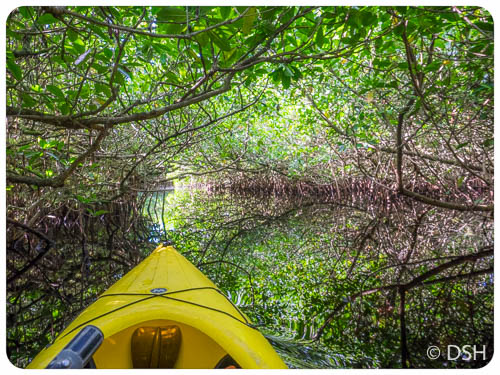 A wonderland of reflections 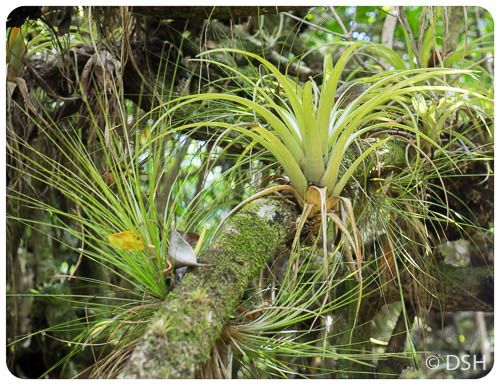 Air plants are in abundence 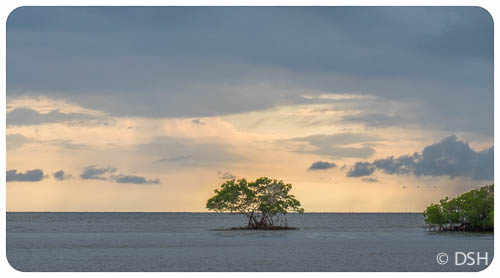 Some of the islands are very small 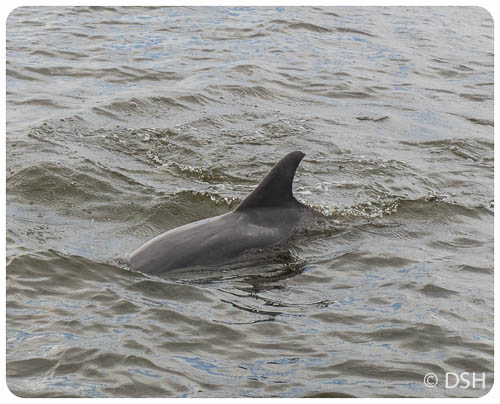 The dolphins were hard to spot and rarely raised their heads above the surface.

I think this is a vulture; there were plenty of them sitting up in the trees. 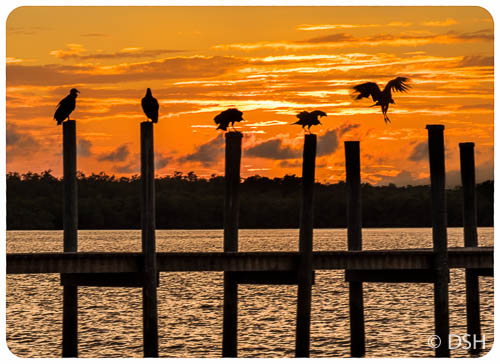 This was my favorite Florida sunset.

Sunrise the next morning

Panthers are an endangered subspecies of cougars. This is the only one I saw.

A botanist will tell you that these are sedges, not grasses 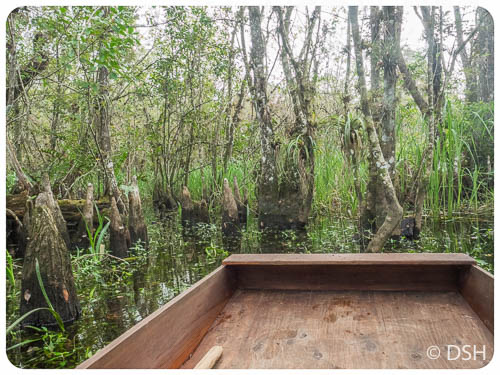 View from my seat on a flat-bottomed boat

These roots support a Swap Apple Tree (a.k.a. Pond Apple), apparently the gators love to eat the fruit. 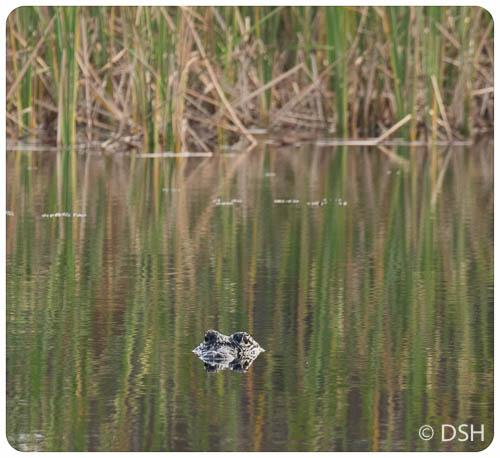 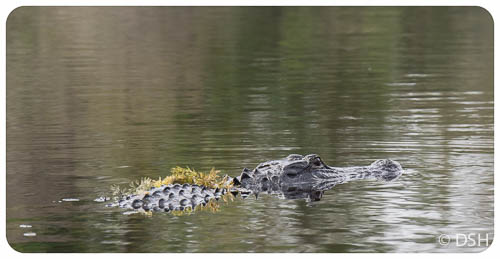 This guy had a bit of vegetation stuck to his back

There is an Osprey at the top of this odd tree 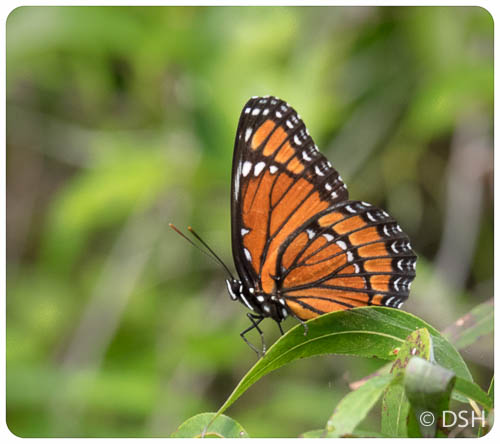 I held this two-month old alligator. The young tend to be more colorful than the adults. 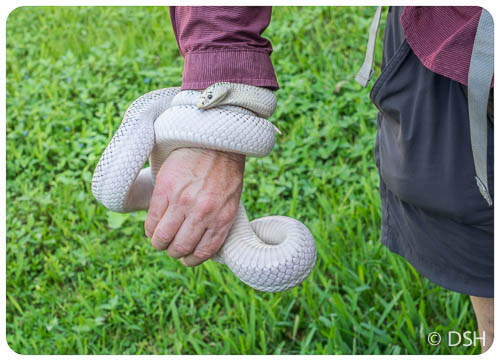 I also held this cuddly King Snake, or perhaps I should say she held me.

Another of the critters at the Swamp Ape Research Center

I liked the clouds. 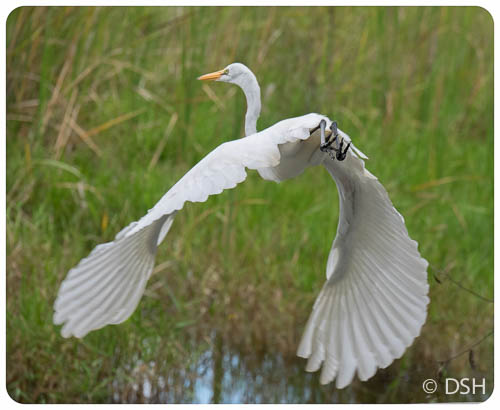 This one walked across Loop Road 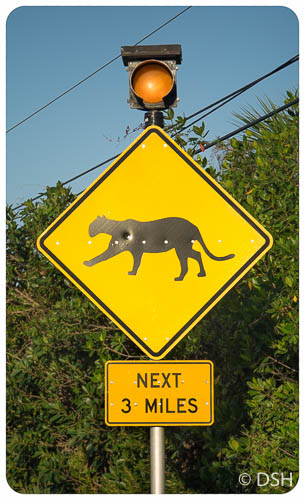 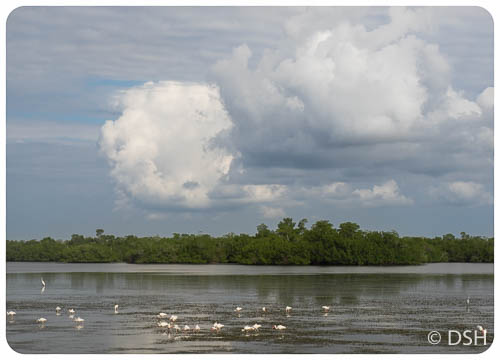 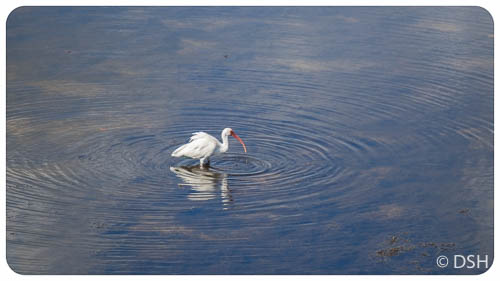 A few came close enough to shore for me to photograph (200 mm equivalent lens, slightly cropped) 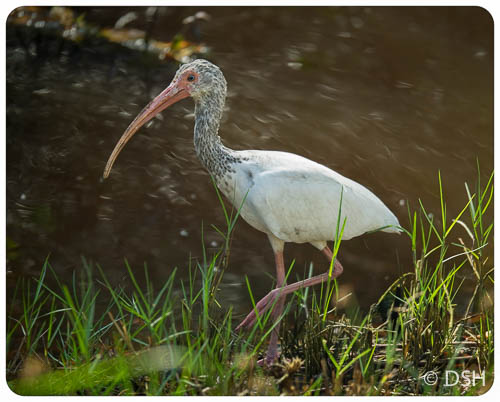 Portrait of a Great Egret

Brown Anole on a boardwalk at Ding Darling

A pile of baby alligators, mom was in the bushes behind. She’ll protect them for about a year, but most will be eaten before adulthood. 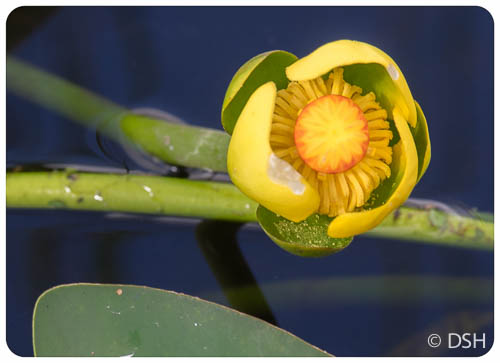 Spatterdock, a type of water lily 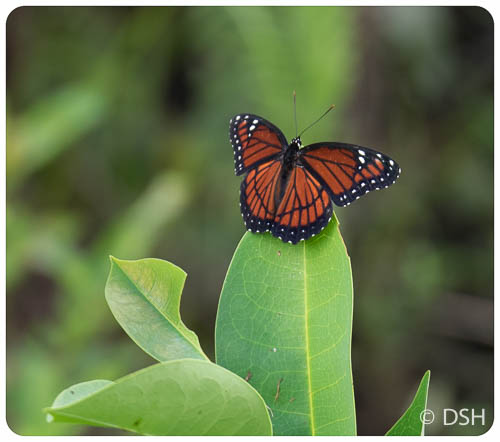 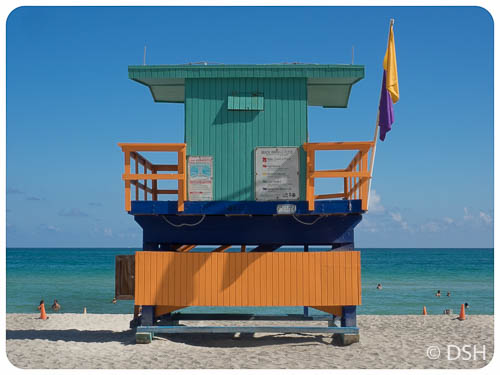 Caught in the rain, again.