My almost two-wek elephant tour in Northern Thailand has begun. I’m traveling with five other women, including our tour leader, Jami. We are all from the west coast of America: California, Washington, and Vancouver. We loaded into a van and headed south from Chiang Mai. We started with a couple days observing elephants in the forest at the Boon Lot’s Elephant Sanctuary, and toured the ruins of Sukhothai, capital of Thailand before Ayutthaya.

Published late due to lack of WiFi.

In Chiang Mai where we had our opening circle. 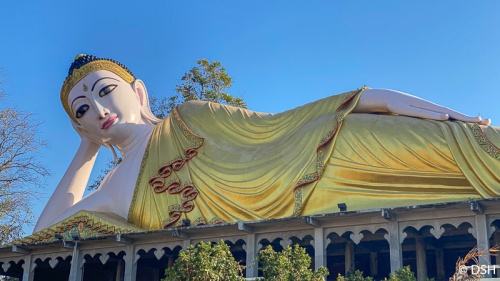 A reclining Buddha on our way to Sukhothai Province

Pang Fai, in her 60’s, eager for her daily treat 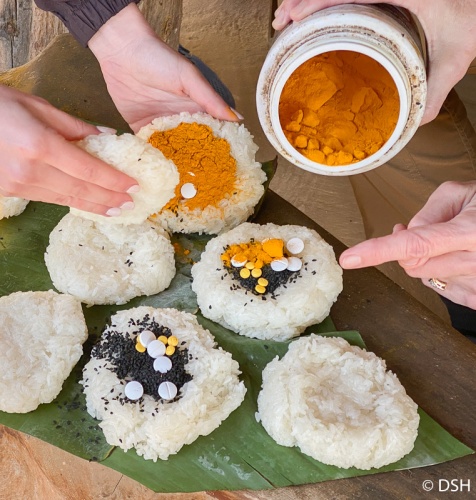 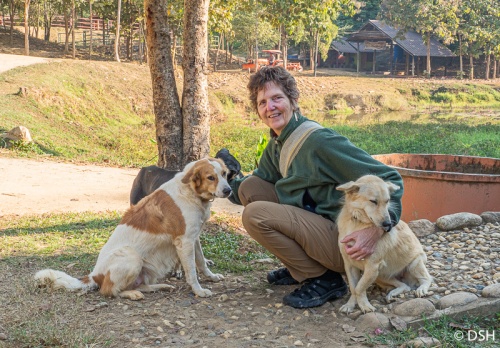 Valerie and a few of the outside dogs at Boon Lotts 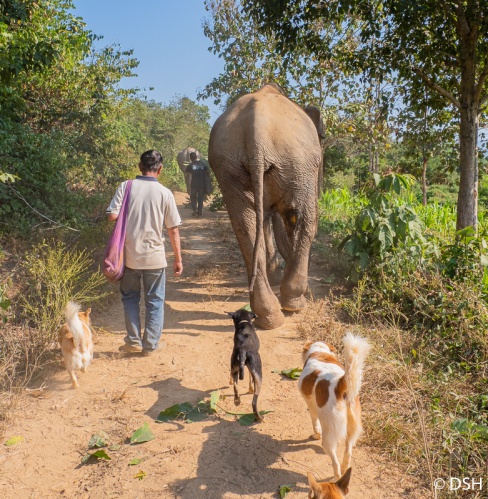 On our way to the forest 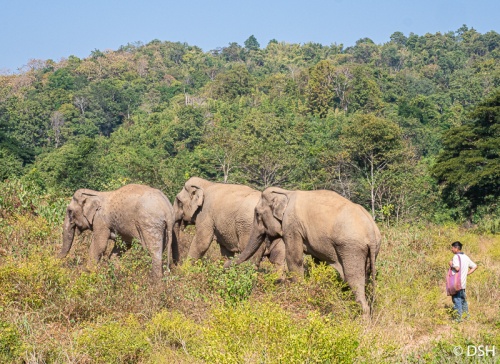 Jami and Luke, Katherine’s youngest child, in a treehouse

One of two tree houses used for elephant observation

More elephants, the back one with a bootie due to foot injury 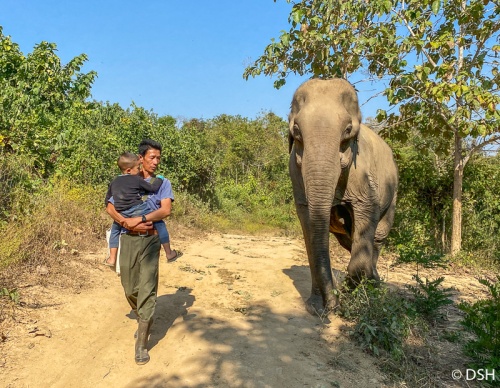 Val and Judith-Kate on the way to market 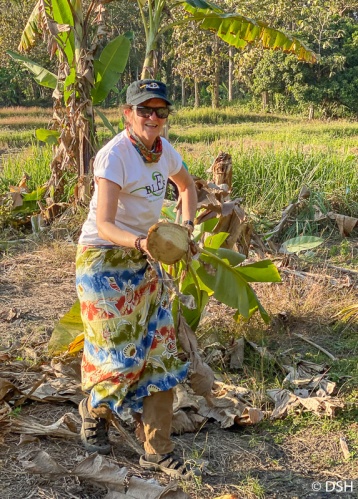 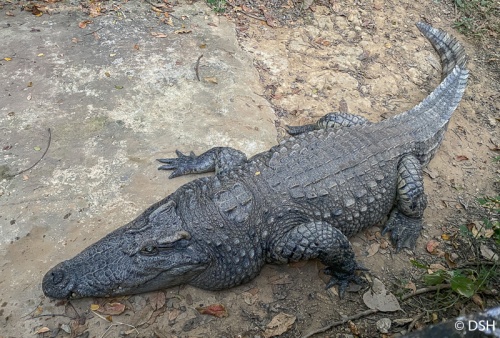 Jerry, the crocodile, eats live fish once a week 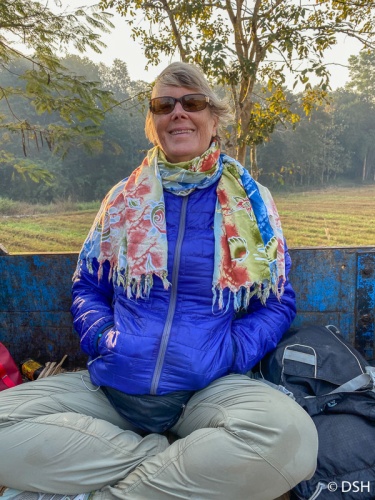 Shivering on my morning ride back to Boon Lotts 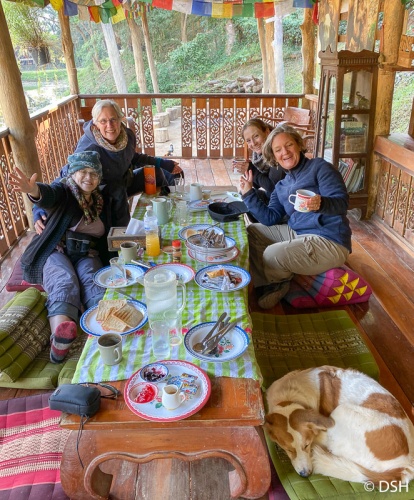 Walking back to the forest 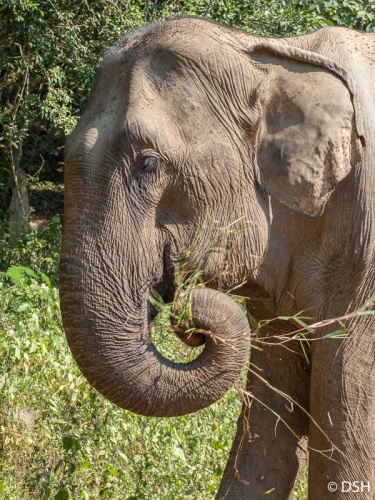 and lots of food.

A snack with some of the mahouts

Our group, plus mahouts, Katherine, and her two younger sons. 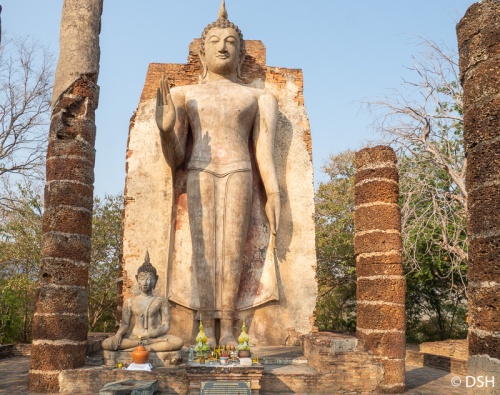 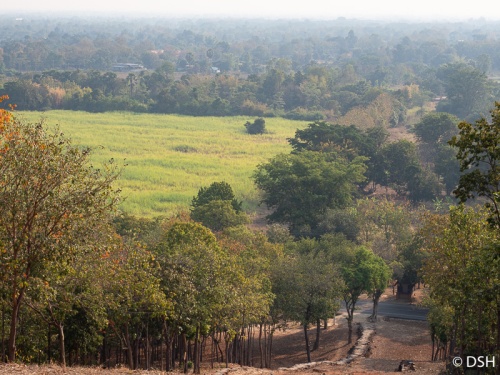 Large Buddha in a small space 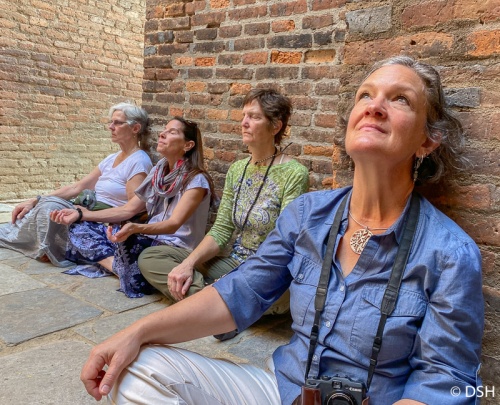 Sitting below the Buddha 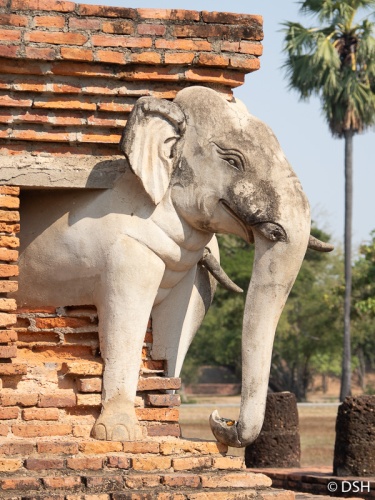 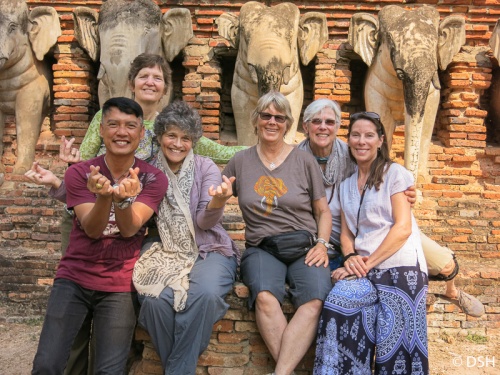 Our driver, Khack, and my travel group: Valerie, Judith-Kate, me, Sharmon, and Suzette

Khack where we rented bicycles 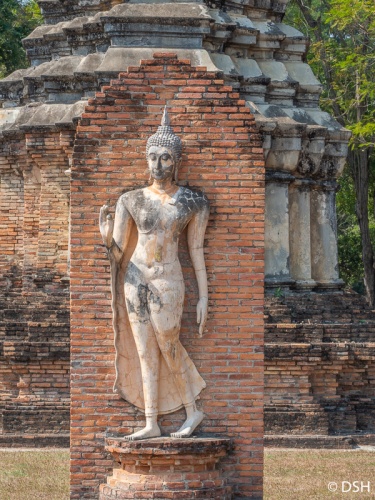 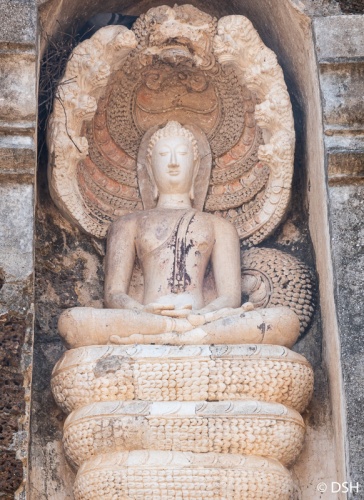 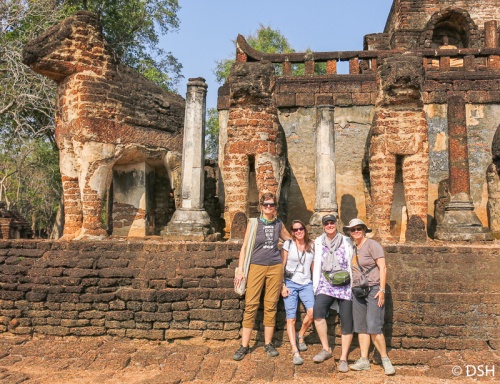 Our driver, Khack, picked us up after breakfast and took us to Suan Doi House (Garden Mountain House), where Jami lead us in an opening ceremony. I’ve had an affinity for elephants for decades, as evidenced by some of my home décor. Asked about what attracts me to them, I replied their wisdom and compassion. They live long lives, have great memories, take care of each other, and their intelligence ranks up there with chimps and dolphins.

One of our first stops was 7-Eleven for change. ATMs dispense 1000 bhat notes (about $33), but most vendors don’t have enough cash on hand to accept these. On Jami’s advice, I bought a spicy tamarind treat which I really like. We also stopped to sample goi, a.k.a. yam yam, a tasty treat made with yam, coconut, sesame, and sugar. I liked both the hot cooked version (which we requested with less sugar) and the thin crispy chips. After photographing dozens of elephant statues, I saw my first live one when we stopped for lunch at TECC, the Thai Elephant Conservation Center which we will be visiting later on our tour.

I sorted Chiang Mai photos in the van as we continued south towards Sukhothai. I wish airline seats were this comfortable. We had dinner at Boon Lotts with Katherine (Kat), a Brit who founded this elephant sanctuary along with her non-deceased Thai husband. She, with the help of her five young children, mahouts and staff, provides a home for about a dozen rescued and retired elephants and many other animals. She told us a beautiful story of an elephant who spent the last year of her 60-year life at the sanctuary, grateful for the welcoming fruit she received, and departed on the wings of a butterfly. We also heard about the python that she found in her house this year; that would send me packing.

We are staying at a guest house a short distance from BLES. Like most places in Thailand, it had no heat and I needed two quilts to stay warm. We got picked up in a van, along with a young couple also visiting there this week. After a simple breakfast, we spent the whole day with elephants. Three females, nicknamed the Gossip Girls, came down from their night enclosure and hung out nearby, chatting with each other, making a purr-like rumble. We prepared rice patties filled with meds for the oldest elephant. She was used to the routine and came over waving her trunk wondering what was taking so long. I’ve never been this close to an elephant before. Next stop: the medical hut, where Kat and the mahouts treated a couple elephants, one for a foot problem and one for a sore that’s not healing in her back leg. Kat injected fluid in the wound and punched the leg to get out puss.

We walked into the forest with the elephants and their mahouts, and spent hours observing elephants. These huge animals are vegetarians, eating grasses and leaves all day long. They don’t like dirt mixed with their greens; I saw one whack a bunch of grass on the ground until all the dirt came off the roots. Lunch was delivered via truck and we ate it in a treehouse. We walked back to the house and climbed in the back of a large truck to run errands: picking kids up from school, cutting banana trees for the elephants, and picking up live fish for the crocodile who only eats weekly. After a vegan dinner, and a few purchases from the gift shop, we sat around a fire, drinking shots of home-brewed rice whisky and listening to stories about elephants. We left around 20:00 and got a ride back to our guesthouse.

This morning we were picked up in the truck and shivered on our way to BLES. Kat shared more elephant stories with us over breakfast, then we walked back into the forest and watched the elephants for a few hours. Kat, her two youngest sons, and the mahouts then joined us for a goodbye snack at a nearby reservoir. We were able to ask questions and learned that the mahouts like both their pay and the elephants. Each is dedicated to one elephant for years, forming a strong bond of trust. We bid farewell and drove about an hour to Sukhothai.

I figured out when I’m getting bitten by silent, unseen mosquitos: in bed at night. This explains why the bites are mostly on my neck. I’m going to start using insect repellent in my room.

Today we toured the ruins of Sukhothai, the capital of the Sukhothai Kingdom in the 13th-14th centuries, one of several political entities that later joined to form Thailand. Our first stop, Wat Saphan Hin, was reached by a short walk up a stone path. There we were greeted by a large standing Buddha gazing down at a beautiful view, a peaceful way to begin our day. Wat Sri Chum also contained a large Buddha, this one in a seated position; here we spent a few minutes seated below it, next to a huge hand on which visitors had rubbed gold paper. After a quick group shot in front of the elephants at Wat Sorasak, Jami rented bicycles for us and we set out to explore the walled center of this small city. I made it to the main temple area, which I think it called Wat Mahathat, before my rear brake failed and I could no longer move my bicycle forward. Several people, including Val, helped me find the nut and bolt which had fallen off, and a couple security guards helped put it back together. In the interest of caution, I headed back our rendezvous spot early, using the extra time to shop for souvenirs. In this case, I got a small Ganesh carving and a couple scarves.

We had the afternoon free and most of us got massages in our rooms. While relaxing, the Thai oil massages aren’t as deep as the ones in Cambodia; I’ll probably stick with the traditional Thai massages going forward.

Heading back north, we stopped at Si Satchanalai, “City of Good People”, founded in 1250 as the second center of Sukhothai Kingdom and residence of the crown prince. We rented bicycles to explore this small, flat city. The weather was perfect and my one-speed bicycle worked fine.

After lunch, which included a steamed fish with a delicious lime sauce, we continued our van ride, stopping at a fabric store where everyone bought something. We reached Lampang in the late afternoon. Our teak guesthouse is in a lovely spot overlooking the Wang River. We had drinks on the patio, took a short walk to a restaurant serving New York style pizza; the owner has never been to that state; he’s from Oregon.