The Legend has a capacity of 100 passengers, but there were only 61 on board our cruise. It’s larger and nicer than the one we had booked. We have been divided into four groups for excursion; we’re part of the Cormorant group, the others are albatrosses, boobies, and dolphins.

Monday
We started out quite frustrated this morning, but ended up satisfied. We road the bus back to the airport and waited for the rest of the passengers for the Legend, a wasted morning. We then transferred to the ship and received our room assignments. One room was great, a spacious double with windows. The other was a cramped interior room which none of us could stand, including Sandra, a nice young woman from East Berlin who was assigned to room with us. We pleaded with the ship manager and finally by late afternoon he relented and gave us another window room even though he was unable to get the change confirmed by the company managing the Xavier.

We had a nice buffet lunch, received an orientation to the ship, and then boarded dinghies to Santa Cruz Island for a bus ride up to the highlands where we saw giant tortoises in the wild. I had to scramble out of the way of one who walked right towards me as I was photographing her. When another tourist approached too close, she hissed and retreated into her shell. it rained on our way back until we reached the coast. The light was beautiful on our dingy ride back and we were thrilled to see Blue-footed Boobies, both on the rocks and flying overhead. It’s warm and humid; I’m wearing shorts and sandals for the first time.

The rocking of the ship almost put me to sleep during our briefings – safety procedures and an overview of tomorrow’s excursions. 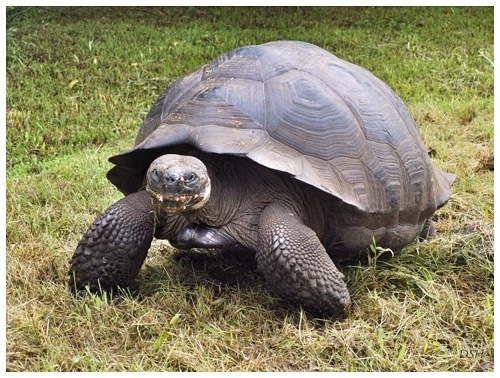 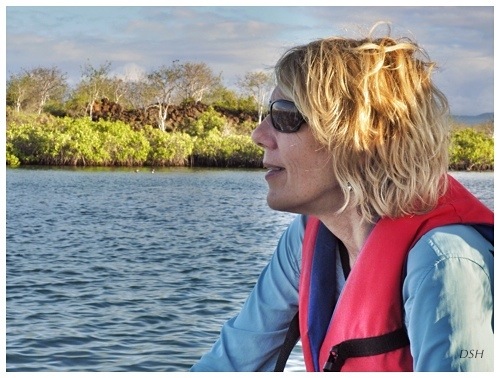 Tuesday
I slept fairly well, in spite of the rocking and engine noise, no hint of seasickness. Breakfast was at 7:00 mainland/ship time (6:00 Galapagos time). After eating, we collected snorkel gear and headed out for two morning excursions at Puerto Egas on Santiago Island. After a wet landing on a red beach, we took a walk to see sea iguanas, sea lions, fur seals, lava lizards, and various birds. I really enjoy getting close to animals that aren’t afraid of us. Then we snorkeled. I was pleased to find that the water to be a comfortable temperature. It was a bit murky, but I enjoyed seeing a variety of fish, poorly captured on my cheap waterproof camera (which I figured out how to charge).

After lunch, all three of us napped. I made the mistake of taking the first half hour of my nap on a chaise lounge and now have sunburnt legs. Karen decided to stay behind for the afternoon snorkel at Bartolme Island. Nancy and I went, hoping to see penguins. Instead we saw similar fish to the last stop. We had time for a quick shower and change before our final outing of the day, a walk up 300-400 steps to the top of this small volcanic island. We welcomed the overcast skies, otherwise this would be one hot walk. We were rewarded with great views of the archipelago. On our way back in the dingy, our boatman spotted a few penguins, which all 15 of us photographed. (I could have used a longer lens; I’m shooting with the 35mm equivalent of a 200 mm lens).

For dinner, we had a barbecue on the deck. I’ll probably gain a couple pounds with all the food they’re feeding us. 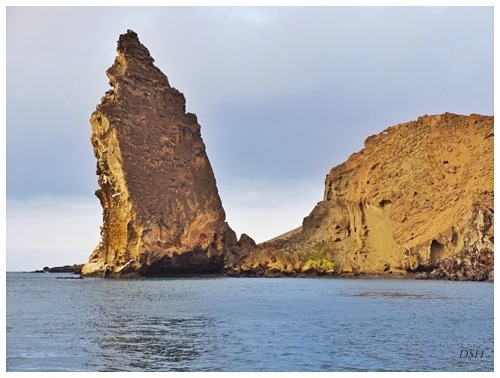 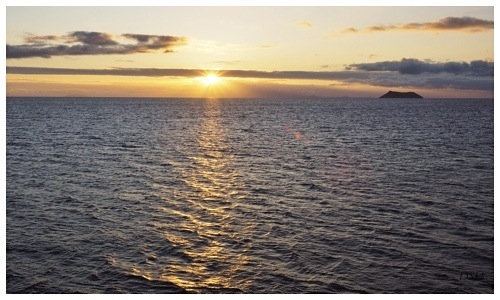 Wednesday
Up again at 6:30, our first outing departed at 8:00. Back to Santa Cruz, where the cactuses grow like trees, this time to Dragon Hill. We saw many colorful land iguanas. I’d say they have a face only a mother could love, except in this case the mothers abandon their eggs within hours of laying them. As with all the reptiles on these islands, the young are left to fend for themselves, and try to avoid being eaten by hawks and other birds (plus human-introduced cats and rats). We also saw a couple flamingoes in a lagoon and a couple flying overhead – my first sighting of a flamingo in flight. The weather was perfect, a bright overcast. We were pleased to find a platter of fruit and a chocolate fountain when we returned to ship. (There isn’t much chocolate aboard this vessel, so I accept every bit I get).

We attended a naturalist talk before lunch. In mid-afternoon, I joined a few other passengers for a deep water snorkel off North Seymour. Actually the water wasn’t that deep, but we went off the dingy because the shore was rocky. I saw as real small sharks and a large school of — fish. we returned in time for the end of the ice cream social – more chocolate, this time with Amaretto on top, yum.

I had time for a quick shower before my favorite outing yet. We saw numerous Frigatebirds, from fluffy white babies to red throated adult males. There were Blue-footed Booby nests; the parents take turn watching the young when they are little. We got a glimpse of a featherless baby under her mom and a mating dance. We also saw Swallow-tailed Gulls and more land iguanas. 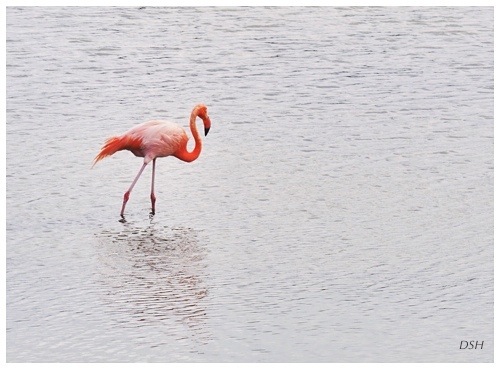 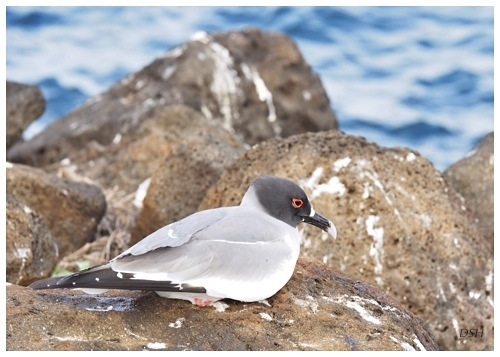 Thursday
Our three-language wake up call (Spanish, English, and French) came even earlier than usual. Our last excursion from the legend left the ship at 7:30. We visited a narrow beach on Santa Cruz. I went barefoot. This is one of the spots where sea turtles lay their eggs. We could see tracks where the newly hatch turtles had headed to the water. It was a pleasant to to spend an hour.

Back on board, we awaited departure, wondering what would be planned for us next. Our other refugees had already heard from their travel agents; they are all boarding our ships and most are heading to Espanola, the island that was top on my list. 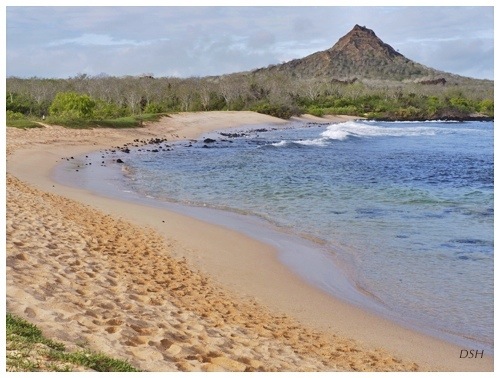 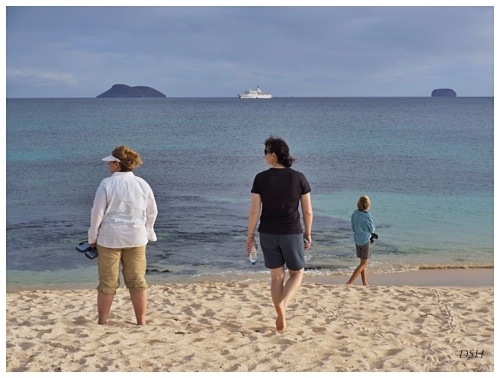 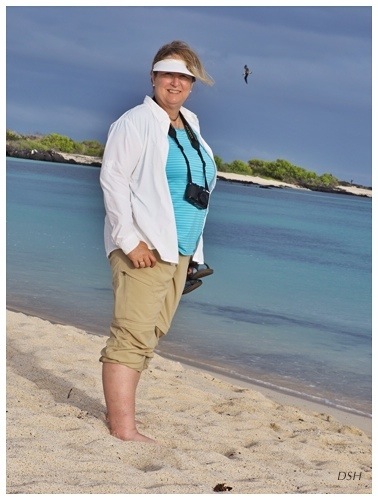 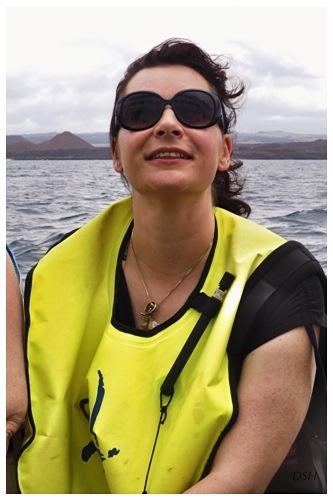 3 thoughts on “Galapagos – The Legend”